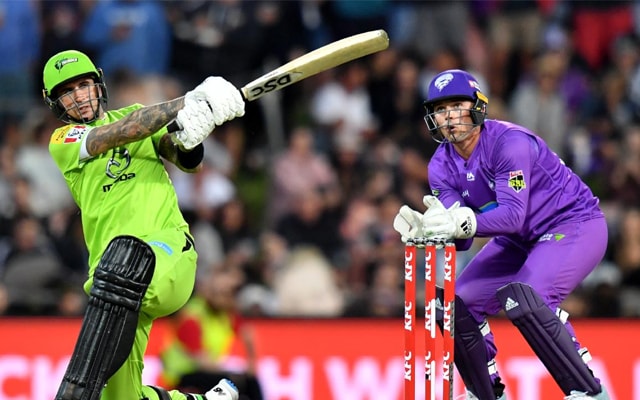 Sydney Thunder defeated Hobart Hurricanes by 57 runs in the Eliminator of Big Bash League (BBL). Alex Hales and Usman Khawaja performed with the bat, while Jonathan Cook played a vital role with the ball as Sydney Thunder advanced to the Knockout match against Adelaide Strikers on February 1.

Sydney Thunder won the toss and opted to bat first. Usman Khawaja and Alex Hales opened the innings against Hobart Hurricanes. The opening pair amassed 100+ runs in the first 10 overs of the match. Usman Khwaja scored 54 runs from 34 balls with a six and 7 fours before getting lbw by James Faulkner.

Alex Hales, on the other end, also went all out with the bat as he scored 60 runs from 37 balls with 6 fours and 3 sixes. Thunder skipper Callum Ferguson added 33 runs from 22 balls. Alex Ross and Chris Morris pushed their team to a total of 197/5 after 20 overs. James Faulkner, Clive Rose, Nathan Ellis, and Scott Boland took 1 wicket each.

Hobart Hurricanes required 198 runs from 20 overs to win the match. The hurricanes’ skipper Matthew Wade could only score 14 runs from 11 balls, while D’Arcy Short contributed 37 runs from 24 deliveries. Jonathan Cook dismissed both openers. George Bailey and wicketkeeper-batsmanBen McDermott added 13 runs each. Simon Milenko contributed 28 runs from 27 balls towards the end of the innings as the Hurricanes fell for 140 in 18.3 overs.

Sydney Thunder’s Jonathan Cook took 4 wickets for 21 runs from his overs and was also named the “Player of the Match”. Chris Morris secured 3 wickets for 27 runs. Daniel Sams took 2 while Chris Tremain got 1 for 16.

Sydney Thunder will now face Adelaide Strikers in the knockout match on February 1 at the Adelaide Oval.

Melbourne Stars will face Sydney Sixers in the Qualifier at Melbourne tomorrow on January 31. The final of the Big Bash League will be played on  February 8.