Australia standing firm at the end of Day 1:

Australia vs New Zealand, The Day 1 of 1st Test ended as Australia piled up a total of 248 runs at the cost of 4 wickets after 90 overs. The 28-year-old New Zealand’s Lockie Ferguson also made his Test debut. Australia won the toss and opted to bat first. 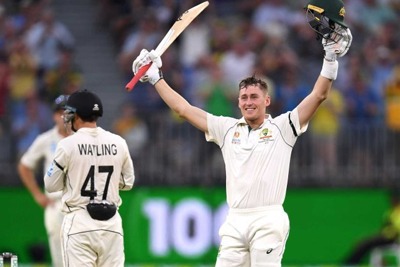 David Warner and Joe Burns came to bat for their team against New Zealand. The home side lost their first wicket as Joe Burns got lbw by Colin de Grandhomme after facing 42 balls for 9 runs. David Warner got dismissed by Neil Wagner and fell short of his 7000 runs by just 4 runs as he scored 43 runs from 74 deliveries in the first innings.

Can New Zealand force a breakthrough early on in the final session?

While the New Zealand bowlers did make the Australian batting line up struggle, Marnus Labuschagne stood there like a wall as he scored his third consecutive Test century.

Marnus Labuschagne shared a 132 runs partnership with Steven Smith for the third-wicket and had scored an unbeaten 110 runs for 202 balls by the end of the day.

Day one of #AUSvNZ comes to a close!

The hosts finish the day 248/4, Marnus Labuschagne scored his third Test century in as many innings ? pic.twitter.com/L9uM8ZGmkF

Travis Head is also not out after adding 20 runs from 34 balls and will resume his innings along with Marnus Labuschagne on Day 2 of the 1st Test. Australia has plenty of wickets left, they had a slow day, but they have plenty of room to turn that around on Day 2. Wasim Khan: The series against England won't be easy Pakistan have taken a higher ratio of the young sensation in…