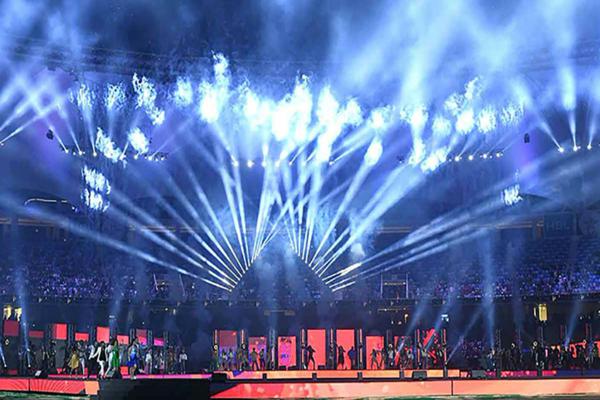 PSL 5: The most awaited and fastly growing T20 league, Pakistan Super League (PSL) has been just kicked off after being chased off by an opening ceremony at National Stadium, Karachi.

Although sometimes Karachi crowd seems to be disappointing in domestic and weekdays matches but today the stadium was full of chants and fans at the opening ceremony eagerly waiting for the match to initiate.

The international stars with every prospect enjoyed the ceremony. Several players from all six franchises were present and must be enjoying now the game between two times PSL Champions, Islamabad United and the current title defenders, Quetta Gladiators.

It is to be noted that Gladiators won the toss and elected to field first. On the contrary, United are going well with couple of boundaries already being hit with Malan crossing his fifty.

As the international cricket has turned his foot back to Pakistan, much gratitude to the Pakistan army and Najam Sethi along with PCB management keen efforts to make Pakistan full of joy and the land of cricket once again. Being relevant, with the return of international cricket, enhancement of confidence regarding security concerns for foreigners has become the reason to join Pakistan for the PSL 5 neglecting security woes which almost have been solved.

“It wasn’t easy, to be honest. Complete PSL in Pakistan is an unbelievable milestone and I am extremely honored to be a part of that team who worked overnight to make this happen,” Ehsan Mani said during the ceremony.

The PCB chairman on the above-stated regards asked the fans to chant “TAYYAR HAIN” for hosting more international cricket in the nation.

“Tell the world, Pakistan Tayyar Hai [Pakistan is ready] for all international action. We are a peace-loving nation and we want more cricket here,” Mani said.

However, the 32-matches tournament will run from February 20th to March 22nd in the four cities of Pakistan that are Karachi, Lahore, Rawalpindi, and Multan.