India defeats Bangladesh by an innings in the 1st Test:

Bangladesh vs India, the first test ended on day 3 when India brought down the entire Bangladesh side for 213 runs in their second innings, winning the match by an innings and 130 runs.

Mayank Agarwal was named the “Player of the Match” for his double-ton that played a vital role for India in setting up a total of 493 runs for 6 wickets in their first innings. 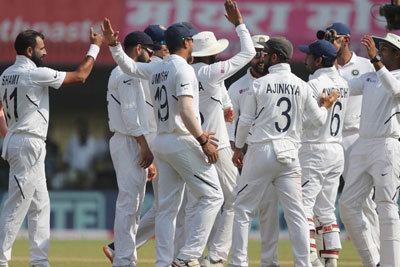 After winning the toss, Bangladesh decided to bat first. Indian bowlers brought down Bangladesh on just 150 runs in their first innings with Mohammad Shami leading the charts with 3 wickets for 27 runs.

India responded with a mammoth total of 493/6 runs after which they declared their innings. Mayank Agarwal played an outstanding inning of 243 runs from 330 balls with 28 fours and 8 sixes as he struck his second double-hundred in his eighth test. Agarwal shared 190 runs partnership with Ajinkya Rahane who scored 86 runs from 172 balls.

What a season he's having ?#INDvBAN pic.twitter.com/kCPzApFHVU

At the beginning of day 3, Bangladesh was on a 343 runs trail. Their second innings was not much different from their first innings. Mushfiqur Rahim was once again the leading run-scorer for Bangladesh with 64 runs from 150 balls with 7 fours. Liton Das scored 35 runs from 39, while Mehidy Hasan Miraz contributed 38 runs from 55 deliveries.

India took two more wickets in the session, but Mushfiqur, Liton and Mehidy have given the Bangladesh fans something to cheer about.

Bangladesh lost all their wickets on 213 runs as they lost the match by 130 runs against India. Mohammad Shami displayed a fantastic show of bowling as he claimed 4 wickets for 31 runs. Ravichandran Ashwin took 3 wickets for 42 runs. Umesh Yadav took 2 for 51, while Ishant Sharma got 1 wicket for himself.

After this victory, India is now leading the points table of the World Test Championship 2019-2021 by 300 points after winning 6 out of 6 matches. The 2nd Test match will start on November 22.