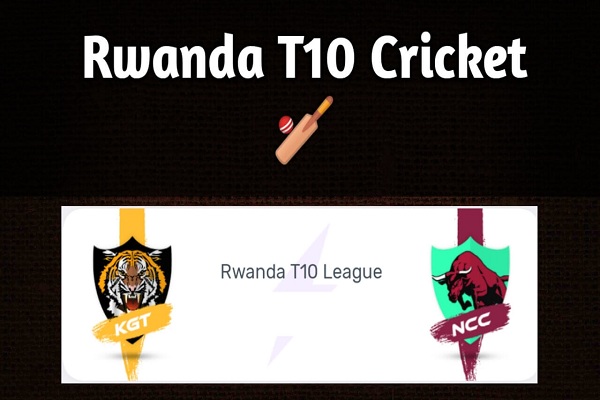 KGT will take on NCC in the Match which will be played at Kigli Cricket Ground; KGT vs NCC Live Score T10 Match of Rwanda Premier T10 League between NCC on 1 April 2020 Live Score & Live Streaming

Taimur Ahmed has been vital with the bat for KKC and has scored 65 runs from the last two innings in the tournament so far. Ahmed’s inclusion in the today match prediction side could earn the user a decent amount of points.

Niyom Eric could pack a punch with the ball and has taken two wickets from the two games in the ongoing campaign for KKC.

Noman Ahmed has scored 29 runs from the last two innings for KKC.

Hasmat Khan has been one of the standouts for Royal Cricket Club and has scored 51 runs from the previous two innings, while also taking a wicket in the tournament this season.

K Patrick has scalped three wickets from the last two games in the tournament so far for Royal Cricket Club.

Rwanda Premier T10 League: Rwanda T10 League is set to start on 1st April 2020. Rwanda T10 Live Score will be available on www.crictribune.com. We will share ball by ball Live score of Rwanda T10 League. Today’s T10  cricket match will be played among KGT vs NCC & KKC vs RSS

With the match set to take place on the Kigli Cricket Ground, the average score on the pith is close to a 100 runs. There is a possibility of the fast bowlers getting a hint of assistance off the wicket. The hot and humid conditions could cause the ball to stick even more, which means the batsmen would have to check their shots before going for the big ones.

In the last game, Asma Tehreem stood out with the bat while opening the innings for his side. Tehreen compiled a 22 ball 35 with two boundaries and a six. Augustine Kezi’s 29 of 16 deliveries and Hirwa Eric’s 19 of nine balls did enough for them to get to a total of 104 from 10 overs. Fahed Jawed  did extremely well with the ball in hand by scalping two wickets for nine runs in two overs. Muvunyi Valen and Augustine Kezi chipped in with a wicket apiece.

Gekire Tito and Haseeb Ur Rehman had a decent start for the first wicket while opening the innings. Gekire Tito scored a nine ball 12, but it was Haseeb’s solid unbeaten knock of 39 from 23 balls with five boundaries and a six which stood out. Rameez Ahmad’s 31 of 16 deliveries in the middle order also played a big role in Nayza getting to a total of 96 in 10 overs. In terms of bowling, Km Irfan was one of the picks with a spell of 2 for 13 from two overs. Ali Raza and Hassan Tahir also contributed with a wicket each. FPV vs ECB Live Score, In the  Match of Emirates D10 League 2020 which will be played at ICC Academy Cricket Ground… DPS vs AAD Live Score, In the  Match of Emirates D10 League 2020 which will be played at ICC Academy Cricket Ground… SCO vs STR Live Score, In the  Match  of Big Bash League 2020-21 which will be played at Adelaide Oval… RPCC vs MKCC Live Score, In the  Match  of ECS T10 Rome 2020 which will be played at Rural Development Trust… THT vs DUC Live Score, In the  Match  of Women’s Super League 2020 which will be played at Newlands, Cape Town. THT vs… MS W vs AS W Live Score, In the  Match  of Rebel WBBL 2020 which will be played at Blacktown…