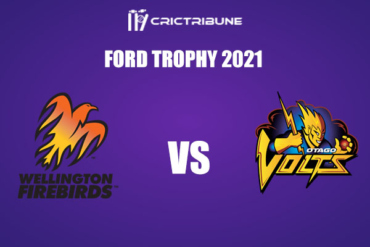 Wellington Firebirds will go head-to-head against the Otago Volts for the second consecutive time in the 28th match of the Ford Trophy 2020-21 on Sunday. After losing their previous match against Otago Volts by 6 wickets in the final over, Wellington Firebirds are in a must-win situation. They need to win by a quite a large margin and also hope for favourable outcomes elsewhere to qualify for the knockouts. With 4 wins and 4 losses, they are at the fifth position in the standings with 18 points.

On the other hand, Otago Volts are also in the same boat, and a win is essential for them to make it to the knockouts. They chased down the mammoth total of 341 runs against Wellington Firebirds in their penultimate league match to stay in the hunt for the knockout qualification. Hamish Rutherford and Anaru Kitchen were the match winners for Otago Volts in their previous match. With this win, they moved to the third spot in the standings with 20 points. Since only Canterbury has cemented their spot in the finals and 4 other teams will be battling for their place in the Preliminary Finals, it is going to be a thrilling contest between the two sides.