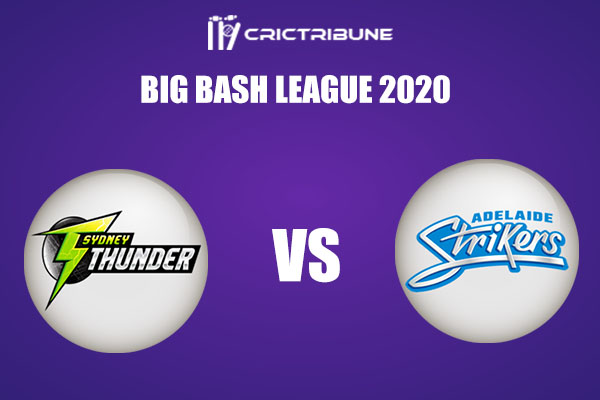 Another mouthwatering fixture coming ahead of us as the Adelaide Strikers are taking on the Sydney Thunder once again at the Adelaide Oval. It was a do-or-die match for both sides last Sunday as both teams want to finalize their spot within the top four as soon as possible. The Strikers were spot on with the ball post powerplay during Thunder batting in the last game.

Things just got better for the Strikers with 4 huge points and are now placed at 3rd position in the points table with only one point ahead of the Thunder. It will be another do or die match for them against the Thunder on Monday to make sure their position within the top four and end their league stage on a positive note.

On the other side, the Thunder were in a good position before this game but now placed below the Strikers at fourth position with 27 points in the points table. They would like to correct the mistakes of making a couple of bad decisions during the chase and give it back immediately on Monday evening to finish their campaign with 8 wins.

It will be soaring hot in Adelaide tomorrow, as the temperature will be as high as 35 °C. There are 20% chances of precipitation.

The track here at the Adelaide Oval is a belter. The team batting first should aim to cross the 180-run mark at least.