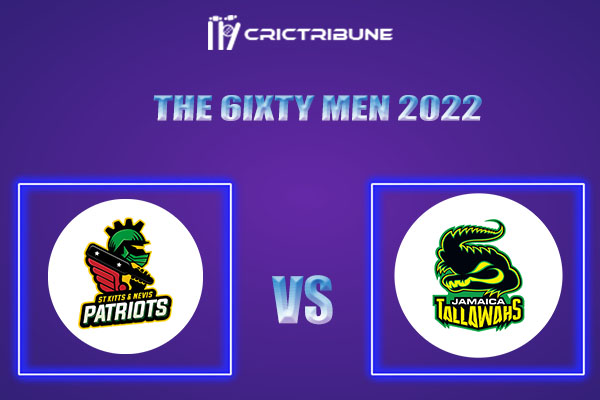 JAM vs SKN Live Score, SLK vs SKN  In the Match of The 6ixty Men 2022, which will be played at Warner Park, Basseterre, St Kitts, West Indies.JAM vs SKN Live Score, Match between Jamaica Tallawahs vs St Kitts and Nevis Patriots Live on 27th August 2022 Live Cricket Score & Live Streaming.

Jamaica Tallawahs (JAM-W) will lock horns with St Kitts and Nevis Patriots (SKN) in Semi-final 1 of 6ixty Men 2022. Tallawahs finished at top of the table with two wins in three league matches. In their last outing, they fell short by eight runs and would look to come up with improved performances. The likes of Rovman Powell and Amir Jangoo will hold a key role for them.

Patriots tried well in the last game but lost by three runs in chasing a mammoth target of 156. They had a single win in three appearances and were at the fourth spot. The likes of Andre Fletcher and Dominic Drakes have performed well for them.

The temperature is expected to hover around 26°C on the matchday with 78% humidity and 19 km/hr wind speed. There are no chances of precipitation during the game.

The surface at Warner Park is a batting-friendly wicket and is anticipated to assist the batters hugely in both innings. There is very little help on offer for the pacers early on, and the spinners may come in handy in the middle overs.