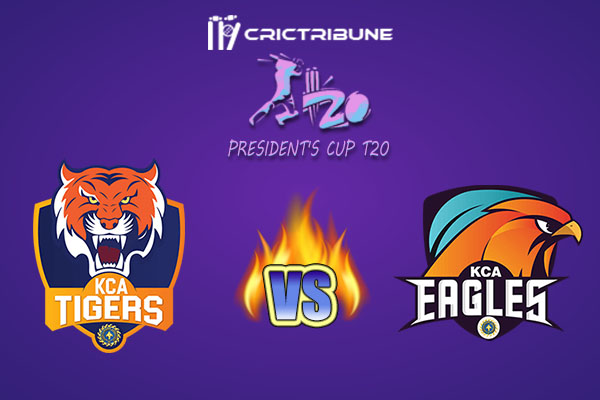 In the 23rd match of the KCA Presidents Cup T20 2021, KCA Tigers will take on KCA Eagles. Last time when these two teams met, Tigers had upper hand and won the match convincingly by 7 wickets. Both the teams are at the bottom of the points table.

KCA Tigers are at the bottom of the points table by losing 6 out of 7 matches. They are already out of the competition. They will try to do good in the remaining matches so that they can come with a positive mindset in the next season.

On the other hand, KCA Eagles are at the second last spot on the points table by winning 2 out of 6 matches. Some of their best players have joined the squad and they are a much stronger team now. It will be very difficult to beat them now.

It is expected to have light rain and because of that the humidity will be little more but we are expecting a full match. The temperature would be around 27 degree Celsius.

For the last three matches, the pitch has looked balanced. The average score is 146 and it can be a good total to defend if the bowlers do a good job.