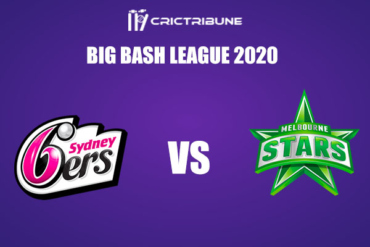 The ongoing edition of BBL has been one of the most thrilling seasons in the history of this competition. The five playoff places might not be confirmed until the very last group stage game, where Sydney Sixers and Melbourne Stars will lock horns.

The former have already booked their place in the playoffs, but nothing can be a better confidence booster than finishing the league stage as table-toppers. On the other hand, Melbourne Stars’ fate will be dependant on the outcome of the previous two games. In case Brisbane Heat and Hobart Hurricanes fail to win their matches, they will be presented with a golden opportunity to advance to the next round.

Heavy showers are expected in Melbourne from the morning right till noon, but it is expected to be sunny from there onwards. At the start of the match, the temperature will be around 18 °C.

The Melbourne Cricket Ground pitch has been favouring the batsmen lately, as bowlers have found it hard to contain runs on this ground. The team batting first should aim for at least 180.