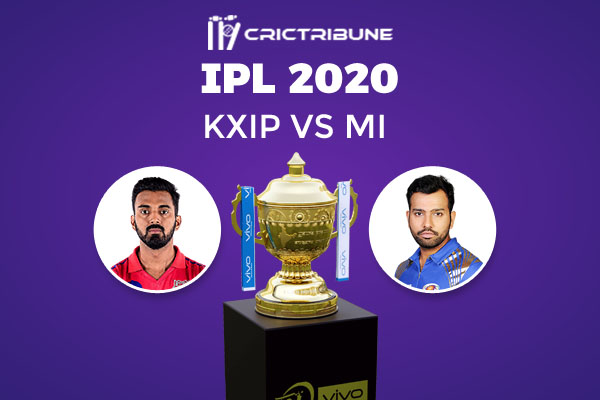 The defending champions suffered two losses in three games and are sitting at the fifth spot on the points table. However, by looking at the balance they possess in their team, they will expect to win this match and take themselves into the top half of the points table.

At the other end, Punjab has started their campaign with two heartbreaking losses, including a win in three games. Similar to Mumbai’s last game, they lost their first game against Delhi in a super-over followed by a big win in their second match. Later at Sharjah, despite scoring the bulk of runs in the first innings, Punjab conceded the highest successful run-chase in the tournament’s history.

Good news for fans that there is no rain prediction during the match and we will expect to see a full-on match of Dream11 IPL 2020. KKR has got a solid team and will play this match as favorites.

The track at the Sheikh Zayed Cricket Stadium has a good balance between the bat and the ball. On this pitch, we have seen some good high scores in the T10 tournament as well. In UAE, it’s often the case that we see good batting-friendly pitches at the start of the tournament, and then gradually as the pitches get used we see some thrilling low scoring matches.

KL Rahul : He has started his tournament very well as he has scored 222 runs in just 3 innings with 1 hundred and fifty each and while opening he will have full freedom to attack Mumbai bowlers and might play yet another good knock.
Mayank Agarwal : He has improved a lot over the years and with 221 runs in 3 innings with 1 hundred and fifty each he has shown his caliber and will be eager to play yet another good innings for his team.
Rohit Sharma : Rohit Sharma played 80 runs winning knock against Knight Riders and the bowling attack of Punjab will suit him so he might get a big one in this match.
Kieron Pollard : He has been in good form in T20 cricket this year and in the last match played a wonderful knock of 60 runs from 24 balls and now a days he is also bowling a few overs at back end of the innings so he is a very good pick for fantasy teams.

For the choice of the third bowler in your fantasy team, you can go with either Jofra Archer or Tom Curran in your team as both are equally capable of providing great returns for the 9.5 point investment you make on them.