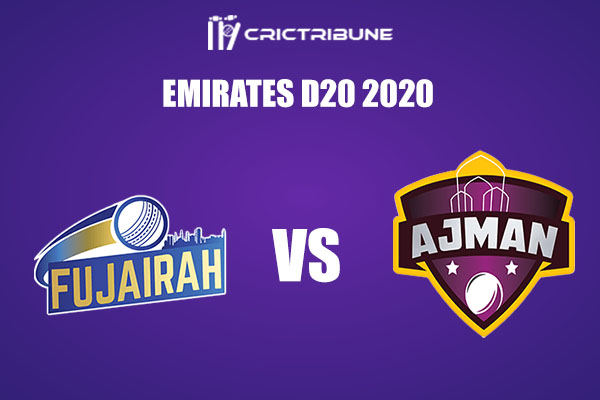 In match number 14 of Emirates D20 2020 tournament, Fujairah square off against Ajman at the ICC Academy in Dubai. The two teams have had contrasting runs in this tournament so far.

Fujairah have been in excellent form and they have won all their four games so far. The Ahmed Raza-led side has defended in two games, and chased down targets in the other two. They have been successful, irrespective of what they’ve done.

On the other hand, 3 consecutive defeats have made Ajman Alubond push down to 5th spot in the standings with 2 points. Their only win in this tournament came against Abu Dhabi by 70 runs. They need to work more on their batting as they failed drastically to score runs in their previous matches. Apart from Rameez Shahzad and Abdul Shakoor none of the other batters haven’t stepped up to the occasion which eventually causing games for them. It will be an important match for them as they are looking to upset the Fujairah Pacific Ventures.

It will be a perfect weather condition to play cricket in Dubai, with the temperature ranging between 25 to 23 degrees Celsius and the humidity will be 47 percent. There is no chance of precipitation for this match.

In the recent matches, we have witnessed it’s getting difficult to chase on this venue as the surface is getting slower in the second half of the match. It’s not a high-scoring venue and we have seen only two 180 plus scores which suggest bowlers are having the upper hand in this tournament.