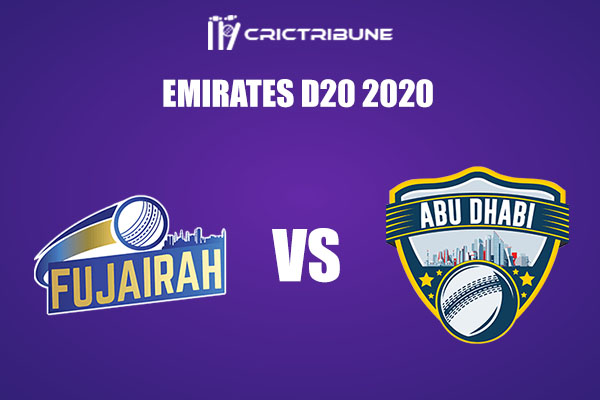 It is the last match of the day where Fujairah is going to clash with Abu Dhabi at the ICC Academy. Both the teams are facing each other for the first time in the league. Fujairah has won the two games they played and is just behind ECB Blues in the points table with two points in their bag. However, their last previous game against Dubai was a close one as they chased down the target 120 runs in the final over of the game. They will be in a great mood after their previous win and will look forward to carrying the same momentum against Abu Dhabi as well.

Abu Dhabi on the other side, are opposite to their opposition as they are yet to register their first win in the inaugural tournament. Adding to that, they lost their last game with a huge margin of 70 runs against Ajman Alubond. There is plenty of scope for improvement in the bowling department in both powerplay and the slog overs. So, they will be desperate to win this match and move up in the points table.

The weather is predicted to be clear in Dubai with no chance of rain. The temperatures will hover around the 22 Degrees Celsius mark.

The track at the ICC Academy, Dubai is pretty much balanced. As we have seen in the last 6 matches of this edition, the team batting first won 3 whereas the chasing team won 3 matches as well.

142 (Out of last six matches played at this venue)