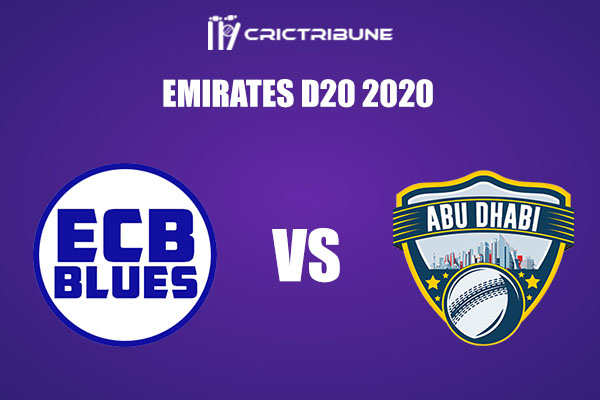 ECB Blues have had a good run in the Emirates D20 tournament, winning five of their seven games. They are second in the points table and will hope to get back to winning ways after a loss against Fujairah Pacific Ventures, where the Basil Hameed-led side fell 14 runs short of a 154-run target.

Abu Dhabi, on the other hand, are at the bottom of the Emirates D20 points table. They are yet to win a game in the tournament and have just two points to their name,,thanks to two matches that were called off. Unsurprisingly, ECB Blues go into this game as the clear favourites.

The weather at the venue is expected to be sunny with around 30 degrees celsius temperature and only a 10% chance of rain. Expect some help for the bowlers as the humidity will be close to 65% and there will be a moderate breeze around as well.

The pitch conditions during the recently concluded D10 tournament had been kind to the batsmen on most occasions with small targets easily chased down and big targets fairly out of reach for the teams batting second. Scores above 110 (in 10 overs) were chased down only 3 times out of the 10 fixtures that were played here.