Delhi Bulls captain Eoin Morgan was named the “Player of the Match” for his classy innings of 52 runs for 27 balls which played a vital role in his team’s victory. 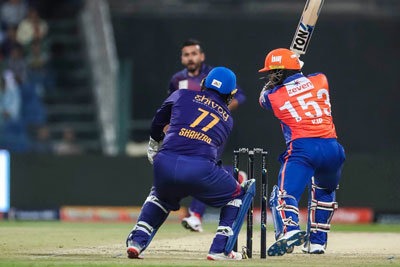 Delhi Bulls won the toss and elected to field first. Deccan Gladiators sent wicketkeeper-batsman Mohammad Shahzad and Captain Shane Watson to bat first. Mohammad Shahzad got caught behind after scoring just 11 runs from 8 balls on Dushmantha Chameera’s delivery in the second over of the innings.

Delhi Bulls required 103 runs to win the match from 10 overs. Deccan Gladiators’ Zahir Khan provided his team with a sound start after he dismissed 3 opponent batsmen for just 17 runs in his in the first 3 overs of the innings. Eoin Morgan and Angelo Mathews took a match-winning stand and successfully chased the target with 3 balls to spare.