India continues its dominance on day 2 of the 1st Test:

Bangladesh vs India, Bangladesh started nicely at the beginning of day 2 of their 1st Test against India but India later recovered brilliantly, owing to an outstanding inning from Mayank Agarwal.

At the end of the day 1, India had bowled out Bangladesh on just 150 runs and scored 86 runs at the loss of 1 wicket after 26 overs with Mayank Agarwal and Cheteshwar Pujara still standing on the crease. 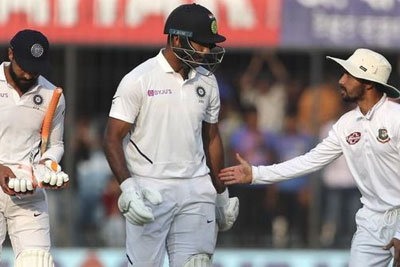 At the start of the day, Cheteshwar Pujara scored his 23rd Test half-century before losing his wicket to Abu Jayed after adding 54 runs from 72 balls. Bangladesh successfully managed to take down Virat Kohli on a duck but Ajinkiya Rahane came and took a stand of 190 runs with Mayank Agarwal to bring India’s total over 300.

India's No.5 reaches the landmark in his 62nd appearance, on day two of the first #INDvBAN Test in Indore

Ajinkya Rahane celebrated his 21st Test fifty as he scored 86 runs from 172 deliveries. Mayank Agarwal then shared a 123 runs partnership with Ravindra Jadeja.

Mayank Agarwal scored his 2nd Double-ton in his eighth Test as he amassed his highest ever Test individual score of 243 runs from 330 balls. Agarwal struck 28 fours and 8 sixes in his innings.

Mayank Agarwal received a standing ovation from his team-mates after his stunning knock against Bangladesh ?#INDvBAN pic.twitter.com/2xRFXk0wHi

Ravindra Jadeja scored his 14th Test half-century and is currently not out with 60 runs from 76 balls, along with Umesh Yadav who struck 10 balls for 25 runs with 3 sixes and a four.

At the end of the day, India is still going strong with a lead of 343 runs after scoring 493/6. Bangladesh’s Abu Jayed has claimed 4 wickets so far for 108 runs, while Ebadat Hossain and Mehidy Hasan Miraz took 1 wicket each for their team. No salary cut of players and employees amid COVID-19: PCB The Pakistan Cricket Board (PCB) has revealed that there will…